From the Spring 2022 issue of the Isa Informer

The mathematics of bull selection worth closer study

As breeding season approaches for many U.S. ranches, I often hear conversations about how much we should pay for a bull, and the budget range that folks feel comfortable spending varies quite a bit. Obviously, open cows are highly detrimental to the bottom line, but beyond just freshening cows, a quality bull also delivers a great deal of hidden value to the operation.

The old rule of thumb is that a bull is worth four or five times the value of a weaned calf. Let’s look at that math based on the market today:
600-pound feeder calves at Producers Auction in San Angelo on 3/9/2022 averaged $1.81 a pound, or $1086. If we factor a bull’s value at four steers, we could pay $4344. If we choose to view him as being worth five steers, we could pay $5430. This method appears to reasonably approximate a bull’s value. Each ranch must examine their own budget and genetic needs and find a value that feels comfortable.
We can conservatively project a bull to produce 125 calves in his lifetime, breeding 25 females a year over five years. Obviously, this can be leveraged higher with multiple breeding seasons and greater breeding ratios. But you can see very quickly that if he improves key traits in your herd, he will add significant value through these changes.

The ripples of a bull’s impact on the herd, whether good or bad, will continue for almost 20 years.

For example, consider a bull’s impact on weaning weight. The Beefmaster average WW EPD is 25. If you were to invest in a bull with a WW EPD of 40, you could expect to receive an additional 15 pounds over those 125 calves, yielding an additional 1875 pounds at weaning. At today’s price of $1.81, that translates to $3393 in additional revenue as compared with breed-average bulls. We can apply this simple analysis to the EPDs for many other critical traits, such as calving ease, carcass merit, longevity, etc. It becomes readily apparent that not all bulls are created equal.

We used a 600-pound weaning weight in the value analysis above. But if your calves weigh less than 600 at weaning, maybe you should look at the breed or the breeding establishment. Are they genetically able to provide that type of production efficiency? Does the breeding program place enough emphasis on growth?

A bull also impacts a herd more subtly through traits such as disposition. Disposition is partly inherited (and partly learned), so he will pass that bad attitude to his sons and daughters. If a bull is difficult to handle or even dangerous, what is the cost? Disposition is one of our foundational principles embodied in the Six Essentials. Our family has been selecting for it since 1937, which has resulted in gentle and responsive cattle.

Bulls also deliver a great deal of hidden value if your operation keeps replacement females. Bulls that sire daughters that can breed early and remain in the herd a long time are extremely valuable. We see a lot of customers who are looking to Beefmasters for the first time because they are frustrated that the females out of their previous breed of bulls don’t last long enough or have too many health problems that knock them out of production. They were promised a premium—and probably paid a lot for the bulls—but inherited expensive repercussions on the production side.

The chart at right shows how long a bull’s contribution carries on after purchase. It is amazing that the bull you buy this year will still be having a genetic impact on your herd through his daughters 16 years later!

Often breeding establishments don’t emphasize the early fertility trait. Many outfits choose to breed heifers at a later age. There are several reasons to do this out of expedience, but is it the right decision genetically? Isa Beefmasters breeds at 14 months to calve at 24 months in a 60-day breeding season. This program can be costly in terms of losses due to open females, but with each generation we are moving the needle forward for early maturity and fertility, keeping only the best genetics in our herd. 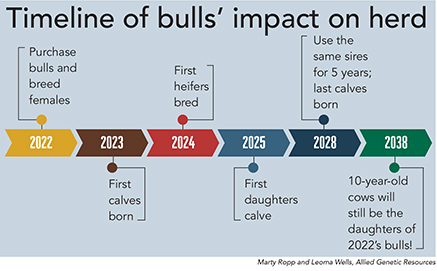 A good bull can make a critical contribution to profitability, and his impact lasts significantly longer than we might think. Clearly, bulls are a significant expense, but we also receive a lot of downstream value out of the right one. Each operation must identify a price they can live with and a breeding establishment that provides the right genetics to help them achieve their goals. Just keep in mind that not all bulls—or breeds—are equal when it comes to the grass-based production of beef calves.