From the Fall 2015 issue of the Isa Informer

From the archives: Rancher develops own breed

Editor’s note: Ron Wentz in Florida shared this article from 1982 that relates some history even we didn’t know! It ran in the September 10, 1982, edition of The Anniston Star, in Anniston, Alabama.

MATHESON, Colo. (AP) — One of America’s shrewdest judges of beef steak on the hoof claims cowboys are the dumbest people in the world.

Tom Lasater is a member of this country’s landed gentry, the big cattle ranchers whose great herds and bull-headed grit tamed the West.

He sprang from the sweltering scrub land of south Texas, where his father amassed holdings of nearly 400,000 acres before he lost most of it in the 1920s. When Tom was born, his father, Edward C. Lasater, a onetime gubernatorial candidate in the Lone Star state, ran 20,000 head of Hereford and Shorthorn range cattle and held title to the world’s largest Jersey herd. 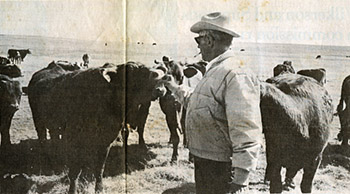 But when Edward died in 1930, Tom dropped out of Princeton to become a traveling salesman for the family creamery. He spent weekdays driving dusty backroads on a butter route, then jumped on a horse on weekends to help his older brother tend what remained of the ranch. He earned $75 a month.

In 1933, Tom Lasater gambled on his good name and struck out on his own in the cattle business.

Today the bandy-legged grandfather is boss of 28,000 acres of prime eastern Colorado grazing land. With only three hired hands, two pickup trucks, and a 1949 tractor to help him, Tom Lasater rides herd on 125 miles of fence, a river, 48 windmills, and more than 1,200 head of cattle.

His bulls, cows and calves comprise a unique breed of bovines. They are Beefmasters, a name Lasater patented in 1949 for his own three-way cross of Shorthorn, Hereford and Brahman cattle. In 1954, the U.S. Department of Agriculture officially recognized the Beefmaster as an American Breed.

After the first Beefmasters were developed between 1931 and 1937, the herd was “closed.” There has been no new blood introduced into Lasater’s foundation stock in 55 years.

At 71, Lasater is not a conglomerate or an appendage of some multinational company. He’s a widower who’s raised five sons and a daughter. He’s made money, and apparently enjoys spending it. He’s a gentleman of the old school, a connoisseur of fine art and aged liquor, a man who’s spend his life wedded to the land, appreciative of the growth and renewal that springs from it. He’s ridden many a horse hard, but he’s never put one away wet.

Lasater calls himself “just a cowboy” who roams his vast range in a scuffed Stetson, dusty boots and faded jeans. But under that favorite old hat there’s a brain that combines the acumen of a businessman, geneticist, nutritionist, naturalist and inventor.

He’s created a suspension fence that needs little maintenance and fewer posts than the average range fence; he’s come up with special high-protein food pellets designed specifically for his herd; he’s initiated systematic performance testing of bulls, and he’s banned all hunting and poisons from his land because “ever since the white man threw the Indian off, it’s been horribly mistreated.”

Lasater only half-jokingly maintains that his peers are “the stupidest people in the world” because they consistently refuse to recognize Mother Nature and their own collective clout.

“Ranchers carry the biggest stick in this country because they’re food producers, and everybody’s got to eat,” says Lasater.

“And everybody else has a union except us. We could sit down and work out a live-and-let-live deal with Mr. Safeway and Mr. A&P and come out ahead, but we don’t. The packer, the feedlot, and the wholesaler all get their cut, but the rancher winds up on the losing end every time.”

Lasater’s breeding and management program is based on the survival of the fittest. When he was first starting out in south Texas, he wrote to stock shows for the scorecards on prize-winning cattle.

“I discovered that 90 percent of the characteristics for which our leading shows were judging cattle had nothing to do with the efficient production of beef,” he recalled. “I sat down and listed what I thought was essential in a good beef animal. I boiled 25 traits down to six. There’s no way to get along without any one of them.”

Those characteristics, which have been emphasized in the Beefmaster herd, are: disposition, fertility, weight, conformation, hardiness and milk production. If any one of Lasater’s animals fails to become gentle enough to eat out of his hand, or doesn’t drop a calf according to schedule, or grows up with misshapen hooves, they are culled from the foundation herd.

“It’s a long pull to let the natural breeding selection take over, and it takes many generations to accomplish, but somebody had to start,” says the blue-eyed, chain-smoking stockman. “Perfection is always the horizon, and anybody who sets their goal so low they can reach it is a fool.”

Lasater says he’s always been a man in a hurry, “and everything I’ve done has worked out well if I do it quick. I got engaged on a first date, was married two weeks later, and it lasted 39 years. It took me three days to buy this ranch.

“Life won’t wait for you to make up your mind.”