From the Fall 2013 issue of the Isa Informer

Still Mothering to the End

Editor’s note: This story was recently shared with me by a friend. It perfectly exemplifies how ranchers feel about their cattle and the remarkable job those cattle do

When we returned home from Kerrville this afternoon, we found Cookie had died. She passed last night or early this morning.

We had had her penned for the last six to eight weeks or so, as it had become too much effort for her to come to feed every night. So, she had her own water, daily bucket of sweet feed, and small barn, without having to work too hard. Not a bad retirement for an old cow. 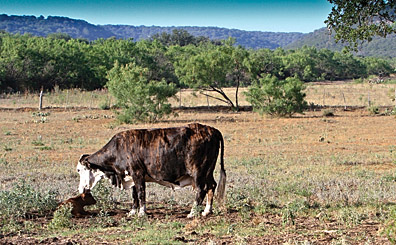 We purchased Cookie in 1991, one of eight yearling purebred Beefmasters heifers we bought to get us started. She and the others were “culls” from a large registered breeder north of us.

She was bred in 1992 and subsequently produced a healthy calf every year for the next 17 consecutive years. She was a heavy milker and a first-rate mother cow in every regard.

In July, if you will remember, she was in a small trap. We had an abandoned calf last summer and put this (blind at the time) calf in with Cookie for company. Cookie’s mothering instincts kicked in immediately. She assumed the nurturing role in every way possible, except milk, of course, which we provided. She cooed that low guttural motherly coo to the calf, which the calf would come to, and they bonded immediately. She was a mother cow to the end. I pulled her out of the barn area tonight, and to a place about a quarter mile away and in the brush. As I pulled her away and past the other cows, which had been watching the activity with unusual interest, they all fell in behind and followed along. Once I left Cookie behind, the cows remained there with her. Never heard of or seen such a thing.

I’ll sure miss taking Cookie her bucket of feed every night. She was more than a good cow.