From the Spring 2018 Informer

Technology guides improvements in the pasture

Technology. This is not word typically associated with beef cattle production. But we might just surprise you. Beef cattle genetic production can—and should be—pretty high-tech.

Isa Beefmasters continuously crusades to improve and validate both our own herd and the Beefmaster breed. We are confident the cattle are high-performing and efficient, but we must demonstrate these strengths to the industry and strive for continual advancement.

One of the many things that makes Beefmasters unique among beef breeds is that they were forged through performance testing. Breed founder Tom Lasater, considered by many to be the father of performance testing, began systematically weighing his calves in 1936. This undertaking was unheard of at a time when cattle were still sold by the head. He knew that weight was a critically important component of cattle profitability. Amazingly ahead of his time, he also understood that how efficiently an animal achieved that weight was critical.

Isa Beefmasters continues the tradition of performance testing today. We are in the middle of testing our 65th set of Beefmaster bulls, which will sell at our annual sale on October 6, 2018. Our sale catalog contains 53 data points, allowing buyers to select their bulls precisely using an amazing range of performance criteria. Whether the rancher cares about pedigree, individual weights, breed-leading EPDs, grass and feed gains or carcass sonogram, he will find that information in our catalog. 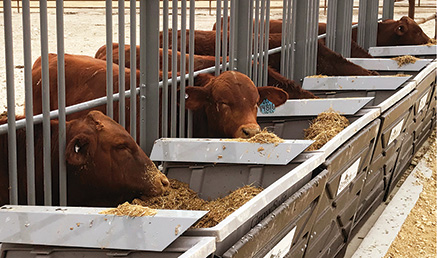 We began using carcass sonogram technology when it first became commercially available in the early 1980s. We have now scanned many thousands of animals for carcass quality. Using this important tool has certainly moved the needle for our herd and is the reason we have many of the top bulls in the breed for IMF (marbling) and Ribeye Area (muscling) EPDs.

Another use of sonogram is pregnancy testing. We can use blood testing and sonogram pregnancy testing to accelerate the identification of open females, as soon as 28 days following the breeding period. This allows us to move open cattle out of the system faster, making more efficient use of our valuable resources.

In addition, we adopted DNA technology when it first became available in the 1980s. It was a natural complement to our commitment to multiple-sire breeding. Multiple-sire breeding means we use our bulls like our commercial customers do: We don’t hand them 25 pretty ladies to breed at their leisure—they have to compete to breed with other sires in large herds. This competition is a key reason that Isa bulls are more aggressive and reliable breeders, feedback we consistently hear from our customers.

DNA today has expanded well beyond sire ID, to genomic enhanced EPDs. We are now using DNA to enhance the accuracy of EPDs. Traditionally, EPDs on virgin bulls have been extremely inaccurate—basically just an average of a bull’s parents. Genomic Enhanced EPDs (GEPDs) allow us to use technology to overlay the bull’s DNA genetic merits with that of his parents to create very accurate EPDs, giving you greater selection confidence in the EPDs you are using.

As we have added EPDs through the years, it has become a bit overwhelming. The addition of indexes has allowed us to synthesize those data points into a meaningful index of our production goals, expressed in dollars. $T, or Terminal Index, is designed for the retained-ownership cattleman, feeder-cattle buyer or packer who is most interested in fast-growing, high-performing steers that will be sold to the packer on grids based on carcass merit. $T is a combination of WW, YW, REA and IMF EPDs.

$M, or Maternal Index, is designed to help ranchers select animals that will make top replacement females. $M accounts for growth, milk production and fertility and considers expected cow maintenance issues to arrive at an economic figure that is meaningful to the cowman. The EPDs considered and factored into $M are WW, YW, Milk and SC. These are balanced against cow maintenance costs as a result of mature cow size and milk production.

Another important use of technology in our breeding program is both Artificial Insemination (AI) and Embryo Transfer (ET). Isa Beefmasters has both fall and spring calving herds, and we synchronize and AI our yearling replacement heifers on the first day of the breeding season each year. This allows us to stack the genetics of our top sires onto our most advanced females to date.

We have also used embryo transfer to expand our numbers and propagate outstanding genetics on the female side more rapidly than nature allows. Cattle breeding is a frustratingly slow process, with one calf per year the absolute best they can achieve. We need to deploy technology to raise the best possible genetics in the fastest manner.

Isa Beefmasters participates in progeny tests any time they come available. This is all part of demonstrating and validating the genetics we raise. The current buzz in the industry is all about feed efficiency, or what an animal consumes to achieve gains. Following are the results of three recent progeny tests that we had sires participating in:

The USDA Agricultural Research Service recently conducted a feed efficiency evaluation at the U.S. Meat Animal Research Center in Clay Center, NE. The 18-breed study evaluated 5,606 head of cattle, composed of finishing steers and growing replacement heifers, and they were evaluated for efficiency using ADG during feed intake data collection. The feed efficiency test results ranked the Beefmaster breed second for Average Daily Gain (ADG) and Dry Matter Intake (DMI) in both steers and heifers, and they were far and away the best when the sexes were combined. Eighteen breeds and Beefmasters were the most efficient! The USDA would not share the sire-specific data, but Isa contributed two sires over the life of the project. 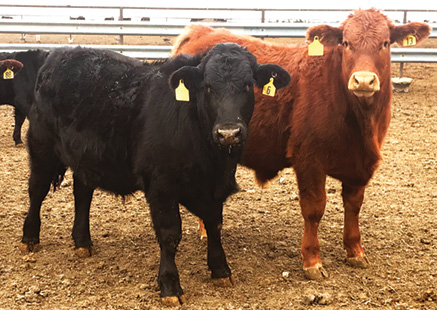 We also submitted our herdsire Escalade to a recent progeny test in West Texas and subsequently Kansas. Four Beefmaster sires were AI’d to commercial Angus females. They were taken to a feedyard in eastern Kansas post-weaning for a Growsafe Feed Efficiency Test, which recently concluded. I am pleased to report that the Escalade heifers were the most efficient in the test! The heifers will be returned to the herd in Texas and be tested for production efficiency, while the steers will be fed and slaughtered this year in Kansas. We look forward to seeing the results of both.

A third progeny test was done in partnership with the University of Arkansas Monticello, which has a registered Beefmaster herd. The females were AI’d to three top Beefmaster sires, including L Bar En Fuego, and then cleaned up to Angus bulls. The En Fuego calves had the highest average weaning weight in the test and were 14% heavier than the Angus-cross calves. The females will be returned to the herd and production efficiency traits like fertility and longevity can be measured. The steers were recently slaughtered in Kansas. We don’t have the sire-specific results yet, but the following chart shows how the Beefmaster steers performed relative to the Angus. Beefmasters were both higher marbling and more profitable!

In addition to the progeny tests, we also recently concluded a feed efficiency test on a set of yearling heifers. There is more detailed information on page 1 of this Informer, but the important takeaway is L Bar 7102 had the highest Efficiency Index among 335 animals of 17 different breeds, and Isa Beefmasters had four of the top ten animals by Efficiency Index and six of the top 11 animals for Residual Feed Intake (RFI)!

While technology might seem far removed from the simple environs of the pasture, it should be viewed instead as a critical tool at a rancher’s disposal. More than thirty years ago, Isa Beefmasters realized cutting-edge technology, starting with sonograms and DNA, could have a swift and decisive impact on our quest for cattle improvement. They say knowledge is power, and we were able to harness this information to drive the direction of our herd ever forward. Today, nationwide progeny tests validate our efforts, proving that with technology, ranchers can make better informed decisions yielding better cattle.