From the Fall 2016 issue of the Isa Informer

Editor’s note: The following excerpt comes from an email inquiry we received from a Russian cattle producer who was interested in Beefmasters. Included below are the opinions he received from a local operator regarding the breed’s viability and then my subsequent response. I thought I’d share this exchange since it sheds light on some common misconceptions regarding Beefmasters in colder climates.

“… [Beefmasters are] not for cattle production in Bryansk or the neighboring regions. They are a composite breed of Brahman, Hereford and Shorthorn. They can be well suited for warm climates of the southern U.S. They usually have about 3⁄8 Brahman influence, similar to the Brangus and Santa Gertrudis. If they are good cattle, they can gain well in the feedlot, but their marbling will be low.”

Thanks for your response. If you’ll indulge me, I’d like to share a couple things about Beefmasters that may surprise to you.

Beefmasters are typically thought of as warm-weather cattle, but they actually do very well in all but the extreme northern climates. My grandfather, Tom Lasater, founded the Beefmaster breed. He moved the Foundation Herd to the state of Colorado in the 1940s, where they have lived since. I have attached the average temperatures for both nearby Limon and Bryansk (see right), and you will see they are amazingly similar. In the winter, eastern Colorado endures cold temperatures, frequent snow and lots of wind. We also have many Beefmaster breeders in other colder U.S. states, such as Nevada, Oregon, Montana and Wisconsin. 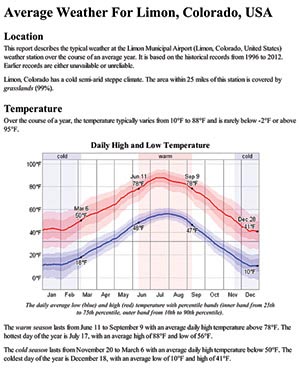 Another critical point is that I assume you would be initially AI’ing to adapted “cold weather” cows such as Angus or Kalmyk. The 50% hybrids from this mating would have no trouble at all being raised in your climate.

Beefmasters originally were created from 50% Bos Indicus (Ghir and Guzerat from India, Nelore from Brazil) and 50% Bos Taurus (25% Hereford, 25% milking Shorthorn). One important distinction is that the Bos Indicus influence comes from three different breeds, not from the modern American Brahman. In fact, the Brahman was developed from many of the same strains at roughly the same time.

The most unique aspect of the Beefmaster breed is selection. My grandfather closed his herd to any outside genetics in 1937. It is thought to be the oldest closed herd in the world today. Nearly 80 years of continuous selection by a clearly defined philosophy has resulted in a homozygous Beef breed. It retains traits from each of the parent breeds, but through selection has developed a unique and wondrous animal unto itself.

The main difference between Beefmasters and the other breeds you mentioned is that Beefmasters are a 5⁄8 x 3⁄8 hybrid. This means they can be continually recreated from the parent breeds, which are also continually evolving, yielding much less consistency. There is also a good deal more heterosis in prepotency from a three-way composite than and two-breed hybrid. 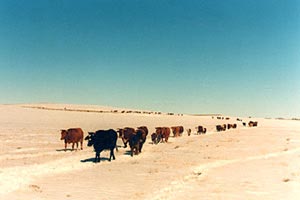 Now to your final point: marbling. Beefmasters are not thought of as heavy marbling cattle. If that were the only target, we would just use Angus. But in the U.S., we find our profit in a myriad of factors, many of them more important than marbling alone.

Beefmasters grade acceptably well, especially when crossed on a fattier breed such as Angus, which is a very typical cross for our customers. In my brochure, you will find some of the numbers relating to feeding and carcass performance of our genetics.

The qualities Beefmasters bring to the cattle-feeding segment are rapid gain, efficient conversion, long-feed efficiency without getting too fat, and a low incidence of sick and death loss. Hanging on the rail, they provide acceptable grade (marbling) with higher yields (more beef, less fat), and a low incidence of cull carcasses. In the U.S. our industry is struggling with the huge overproduction of wasted fat due to the heavy Angus influence. We are striving to raise genetics that will produce lean, yet tender, and consistent beef.

The real magic, though, happens on the ranch, which explains why commercial operators throughout the world use Beefmaster genetics. You will find Beefmaster females to be much more efficient females for low-cost production. They are thriftier and hardier than other breeds and make wonderful mothers. While many in the industry take a discount for terminal-cross females, our customers place a much higher value on the replacement females than the feeder steers. The former is a factory—the latter a commodity.

That’s probably more than you ever wanted to know about Beefmasters, but I appreciate your reading it!