From the Fall 2014 issue of the Isa Informer

What started in 1964 as a dream of ranching and marketing cattle grew into an illustrious career spanning 50 years with three generations of ranchers: Laurie and Annette; their children, Lorenzo and Isabel; and now five grandchildren.

With a goal of establishing the Beefmaster breed in Mexico, Laurie and Annette moved there with their wedding gift of 35 Beefmaster cows and two herd bulls to a one-pasture lease. In 1966, they organized their first bull sale in Múzquiz, which was “the bull sale nobody came to,” so they quickly adapted to selling cattle via private treaty. During their 10 years in Mexico, they established a Beefmaster herd on Rancho Santa Cruz, located in the Sierra Madre mountain range near Múzquiz, Coahuila, and today Beefmasters are Mexico’s largest breed registry. 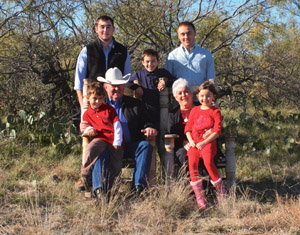 In the early 1970s, Laurie and Annette relocated to San Angelo, Texas, to pursue the feeding and marketing of cattle. Their concept of marketing Beefmaster bulls evolved into annual—and, for a few years, even semiannual—auctions. They have sold more than 17,000 females and 20,000 bulls, and this year marks their 53rd bull sale! In addition to selling hundreds of bulls and females private treaty each year, they also focused on the introduction of Beefmasters into new international markets. Today, they have customers on four continents.

During his 50 years of ranching, Laurie served as president of FBA, as well as director of BBU, Texas and Southwestern Cattle Raisers and National Cattleman’s Association. He is also a stockholder and former director of Nolan Ryan Tender Aged Beef. In 2000, BBU honored Laurie with the Beefmaster Breeder of the Year award.

Throughout the years, Annette ran the office side of the business—doing the books, managing the advertising and keeping the herd registry. She was always the practical and steady voice of the team, keeping Laurie out of more than one wreck.

Laurie and Annette are both elders of the First Presbyterian Church and have volunteered as tutors in local schools and with the Adult Literacy Council. Annette also served as president of the local and district library boards.

Both are published authors: Laurie wrote The Lasater Philosophy Cattle Raising and Tailwind Both Ways. Annette wrote of their 10 years in Mexico in Two to Mexico and penned three children’s books, Lorenzo and Don Clemente, Granddad’s Farm House, and School Days and Book Learnin’.

Isabel and I would like to honor Mom and Dad for their remarkable run—both in life and in business. They have been incredible parents—loving us, teaching us how to lead an exemplary life and giving us an incredible legacy of ranching knowledge.